Bournemouth position in the table 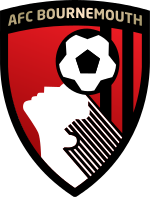 Association Football Club Bournemouth is a professional football club based in Bournemouth, Dorset who play in the Premier League, the top tier of the English football league system. The club's stadium is traditionally known as Dean Court although under a current sponsorship arrangement it is officially called the Vitality Stadium.

Founded in 1890 and nicknamed The Cherries, the team traditionally played in red shirts with white sleeves until 1971, when the strip was changed to red and black stripes, similar to that of A.C. Milan. A predominantly red shirt was chosen for the 2004–05 and 2005–06 seasons before a return to the stripes for the 2006–07 season due to fan demand.

After narrowly avoiding relegation from the Football League in the 2008–09 season, Bournemouth were promoted to League One at the end of the 2009–10 season. After making the League One play-off semi-finals in 2010–11, and achieving a mid-table finish in 2011–12, Bournemouth won promotion to the Championship at the end of the 2012–13 season, putting them in the second tier of the league for only the second time in their history. In the 2014–15 season, they won the Championship title, and earned promotion to the Premier League for the first time in their history.

Show me more statistics about Bournemouth with

Bournemouth was on 9 position during the following seasons: