Brentford position in the table 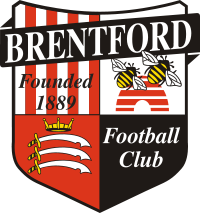 Brentford Football Club is a professional football club based in Brentford, in the London Borough of Hounslow, that currently plays in the Football League Championship. It was founded on 10 October 1889 and plays its home games at Griffin Park, its home stadium since 1904, after a nomadic existence playing at five previous grounds. Brentford's most successful spell came during the 1930s, when it achieved consecutive top six finishes in the First Division. Since the Second World War, it has spent most of its time in the third and fourth tiers of English football. Brentford has been FA Cup quarter-finalists on four occasions, and has three times been Football League Trophy runners-up.

Founded on 10 October 1889, at the Oxford and Cambridge Hotel public house in Brentford – next to Kew Bridge – a meeting was held, between the members of the Brentford Rowing Club, to decide between association football or rugby union, to serve as a winter pursuit for the rowing club and its members. As a result of a vote, by eight votes to five, taken six days later, association football was successful as the sport to partake in.

Show me more statistics about Brentford with

Brentford was on 3 position during the following seasons:

Brentford was on 5 position during the following seasons: