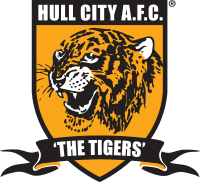 Hull City Association Football Club /ˈhʌl ˈsɪti/ is an English association football club based in Kingston upon Hull, East Riding of Yorkshire. It was founded in 1904. The club participates in The Championship – the second tier of English football – and their greatest achievement in cup competitions came in 2014, when the team reached the final of the FA Cup. In 2007–08 they achieved promotion to the top flight of English football for the first time in their history by winning the Championship play-off final at Wembley Stadium. Their highest league finish was for the 2013–14 season, in which they finished 16th in the Premier League table.

Hull City play their home games at KC Stadium. They previously played at Boothferry Park and moved to their current home in 2002. Boothferry Park has been demolished and has been replaced by a housing development. They traditionally play in black and amber, often with a striped shirt design, hence their nickname The Tigers. The club's mascots are Roary the Tiger and his sister Amber.

Show me more statistics about Hull City with

Hull City was on 16 position during the following seasons:

Hull City was on 17 position during the following seasons:

Hull City was on 18 position during the following seasons: