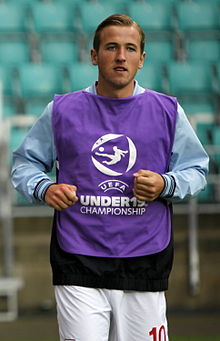 Harry Edward Kane (born 28 July 1993) is an English professional footballer who plays as a forward for Tottenham Hotspur and the England national team.

He made his senior debut for Tottenham on 25 August 2011 in a UEFA Europa League game against Heart of Midlothian. Before establishing himself in Tottenham's first team, Kane spent time on loan in League One playing for Leyton Orient, the Championship playing for Millwall and Leicester City and in the Premier League for Norwich City. He became a regular starter and goalscorer for Tottenham in the 2014–15 season, winning the Premier League Player of the Month award twice, for January and February 2015. With 31 goals across the campaign, 21 of which were in the league, he was also named the PFA Young Player of the Year.