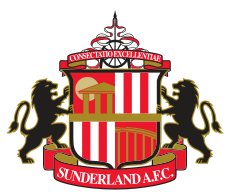 Sunderland Association Football Club (i/ˈsʌndərlənd/, local /ˈsʊnᵈlən/) is an English professional football club based in the North East city of Sunderland in the larger metropolitan area of Tyne and Wear. The club currently plays in the Premier League, the top league of English football. Since its formation in 1879, the club has won six top-flight First Division (now the Premier League) titles (1892, 1893, 1895, 1902, 1913, and 1936), a total only bettered by six other clubs, and has finished runners-up five times. The club has also won the FA Cup twice (1937 and 1973) and been runners-up twice (1913 and 1992), as well as winning the FA Community Shield in 1936 and being finalists the following year. Sunderland have also been Football League Cup finalists in 1985 and 2014.

Sunderland won their first FA Cup in 1937 with a 3–1 victory over Preston North End, and remained in the top league for 68 successive seasons until they were relegated for the first time in 1958. Sunderland's most notable trophy after the Second World War was their second FA Cup in 1973, when the club secured a 1–0 victory over Leeds United. The team has won the second tier title five times in that period and the third tier title once.

Sunderland play their home games at the 49,000-capacity all-seater Stadium of Light having moved from Roker Park in 1997. The original ground capacity was 42,000 which was increased to 49,000 following expansion in 2000. Sunderland have a long-standing rivalry with their neighbouring club Newcastle United, with whom they have contested the Tyne–Wear derby since 1898. Since their most recent promotion to the Premier League in 2007, Sunderland have become one of the world's wealthiest football brands, being valued at USD $93 million in 2014, 31st in the world overall.

Show me more statistics about Sunderland with

Sunderland was on 1 position during the following seasons:

Sunderland was on 2 position during the following seasons:

Sunderland was on 3 position during the following seasons: