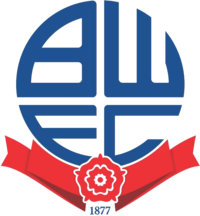 City: Bolton
Stadium: Reebok Stadium
Founded: 1874
Nickname: The Trotters, The Wanderers, The Whites, The White Men, The Men in White

Bolton Wanderers Football Club i/ˈboʊltən/ is an English professional football club based in Bolton. The club competes in the 2015–16 Championship. The club was formed as Christ Church Football Club in 1874, and adopted its current name in 1877. Founder members of the Football League, Bolton have spent the highest number of seasons of any club in the top flight without winning the title (the 2011–12 season was their 73rd, non-consecutive year in the top flight). The closest they have come to the title is third in the First Division on three occasions (1891–92, 1920–21 and 1924–25). As of 2014, the club has spent more seasons in the top division than any other club outside the current Premier League.

Bolton were a successful cup side in the 1920s, winning the FA Cup three times. The club won the cup a fourth time in 1958. A leaner spell followed, reaching a nadir in 1987 when the club spent a season in the Fourth Division. The club regained top-flight status in 1995 after a 15-year absence. In a period of relative success, the club qualified for the UEFA Cup twice, reaching the last 32 in 2005–06 and the last 16 in 2007–08.

The club played at Burnden Park for 102 years from 1895. In 1997 it moved out of town to the Reebok Stadium, named after long-term club sponsor Reebok. The stadium was renamed the Macron Stadium from July 2014 after the club's new sponsor.

Show me more statistics about Bolton Wanderers with

Bolton Wanderers was on 3 position during the following seasons:

Bolton Wanderers was on 4 position during the following seasons:

Bolton Wanderers was on 5 position during the following seasons: