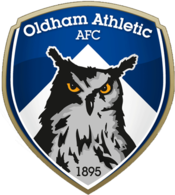 Oldham Athletic Association Football Club is a professional football club in Oldham, Greater Manchester, England. The club competes in Football League One, the third tier of English football, and play home matches at Boundary Park. It is more commonly known as Oldham Athletic, or by its nickname Latics.

Show me more statistics about Oldham Athletic with

Oldham Athletic was on 2 position during the following seasons:

Oldham Athletic was on 4 position during the following seasons: