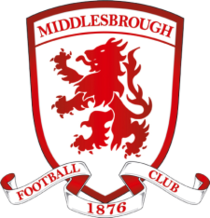 Middlesbrough Football Club /ˈmɪdəlzbrə/, also known as Boro, is an English football club based in Middlesbrough, Teesside, who play in the Football League Championship. Formed in 1876, they have played at the Riverside Stadium since August 1995, their third ground since turning professional in 1889. Their longest-serving home was Ayresome Park, where they played for 92 years, from 1903 to 1995.

The club's highest league finish to date was third in the 1913–14 season and they have only spent two seasons outside of the Football League's top two divisions. The club came close to folding in 1986 after experiencing severe financial difficulties before the club was saved by a consortium led by then board member and later chairman Steve Gibson. Middlesbrough were controversially deducted three points for failing to fulfil a fixture against Blackburn Rovers during the 1996–97 Premier League season and were subsequently relegated. They were promoted the following season and spent eleven consecutive seasons in the top division before relegation. Middlesbrough won the League Cup in 2004, the club's first and only major trophy. They reached the 2006 UEFA Cup Final in May 2006 but were beaten by Spanish side Sevilla. On 24 May 2009, Middlesbrough were relegated to the Championship, failing to extend their 11-year stay in the Premier League.

The club's traditional kit is red with white detailing. The various crests throughout the club's history, the most recent of which was adopted in May 2007, incorporate a lion rampant.

Show me more statistics about Middlesbrough with

Middlesbrough was on 3 position during the following seasons:

Middlesbrough was on 4 position during the following seasons:

Middlesbrough was on 5 position during the following seasons: