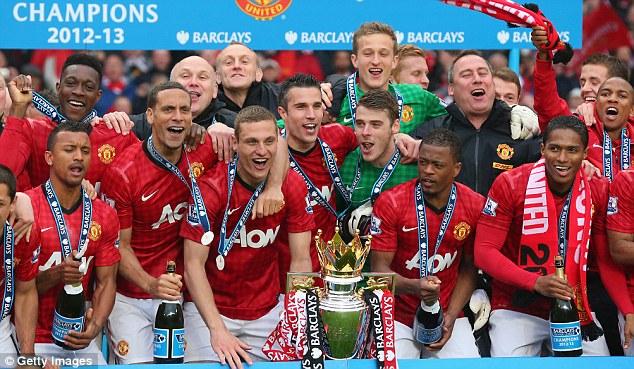 The 2012–13 Premier League was the 21st season of the Premier League, the English professional league for association football clubs, since its establishment in 1992. The fixture schedule was released on 18 June 2012. The season began on 18 August 2012 and ended on 19 May 2013.

Manchester City were the defending champions, having won their first Premier League title the previous season. This was their first top division league title since the 1967–68 season.

On 22 April 2013, Manchester United won their 13th Premier League title and 20th English title overall by defeating Aston Villa 3–0 at Old Trafford. This left reigning champions Manchester City 16 points behind with only 15 left to play for. It was the first time the title had been decided in April since Chelsea were the winners in 2005–06. It was also only the fourth time in the history of the Premier League that it had been won with at least four games of the season remaining, the last time being in 2003–04 when Arsenal were the champions. England national football team manager, Roy Hodgson declared that United's manager, Alex Ferguson, was a "magician" having won 13 titles in 21 seasons.

On 28 April 2013, Queens Park Rangers and Reading were both relegated from the Premier League after a 0–0 draw against each other. Wigan Athletic were the third and final club to be relegated, after a 4–1 defeat to Arsenal on 14 May 2013. This brought an end to their eight-year stay in the Premier League, and also meant that they became the first ever club to win the FA Cup and suffer relegation in the same season.