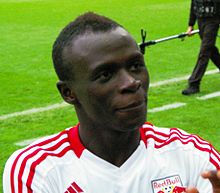 Sadio Mané (born 10 April 1992) is a Senegalese footballer who plays as a winger for English club Southampton and the Senegal national team.

Having begun his career with Metz in France, he transferred to Red Bull Salzburg at the end of his first season in 2012. After winning the Austrian Bundesliga and Austrian Cup in 2013–14, he was signed by Southampton. In the 2014–15 season, Mané set a new Premier League record for the fastest hat-trick, scoring three times in 176 seconds during a 6–1 defeat of Aston Villa at St. Mary's Stadium.