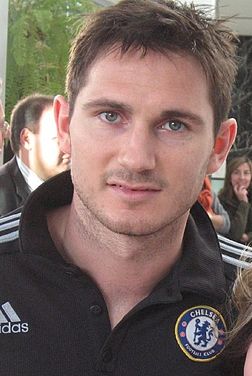 Frank James Lampard OBE (born 20 June 1978) is an English professional footballer who plays as a midfielder for New York City FC. He is the all-time leading goalscorer for Chelsea, where he played for 13 years, and is considered by a number of journalists and football experts to be one of the best midfielders of his generation. He has been described by previous record goal-scorer Bobby Tambling and long-term teammate John Terry as Chelsea's greatest ever player.

Lampard began his career at West Ham United, for whom his father Frank Lampard, Sr. had also played. He secured a place in the first team by the 1997–98 season, and the following year helped the team finish 5th in the Premier League, their highest-ever Premier League placing. In 2001, he moved to rival London club Chelsea for £11 million. In 2014, he was released by Chelsea after 13 years of service. Lampard then joined New York City FC on a two-year deal, in preparation for the club's Major League Soccer debut in 2015, as a free transfer, but would play for Manchester City in the meantime. On 31 December 2014, however, BBC Sport's David Ornstein revealed Lampard is under contract to Manchester City and not New York City as previously claimed by both clubs.