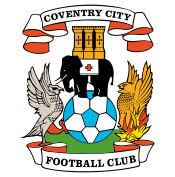 Coventry City F.C. is an English association football club based in Coventry in the West Midlands. The team competes in League One, the third tier of the English football league system. Nicknamed the Sky Blues owing to the colour of their strip, Coventry City were formed in 1883 as Singers F.C., and they joined the Football League in 1919. Their only major trophy was won in 1987 when they beat Tottenham Hotspur 3–2 to win the FA Cup in a match listed by the FA as one of the twelve classic FA Cup Finals, and they are one of only five clubs to have ever won the FA Cup and FA Youth Cup 'double' in the same season. They also reached two Football League Cup semi-finals, in 1981 and 1990.

The club was an inaugural member of the Premier League in 1992 and had spent an impressive 34 consecutive seasons in the English top flight prior to their relegation in 2001. Following eleven seasons in the second-tier Football League Championship without any significant success, Coventry were relegated to Football League One in 2012, the first time in 48 years that the club played in the English league system's third tier.

Coventry has only qualified for European competition once, during the 1970–71 season, when they competed in the European Fairs Cup (now the UEFA Europa League), reaching the second round. Despite beating Bayern Munich 2–1 in their home leg, they had lost 1-6 in the first leg in Munich to go out of the competition. They were unable to compete in the 1987–88 UEFA Cup Winner's Cup due to the ban on English clubs at that time.

From 1899 to 2005, Coventry City played at the Highfield Road stadium. In 1981 it became the first all-seater stadium in English football, though by the late-1990s the club's directors decided it was time to construct a larger stadium and chose a site in the Rowley's Green area of the city. The 32,609 capacity Ricoh Arena was opened in August 2005, but following a rent dispute with the ground's owners the club opted to play their home games at Northampton Town's Sixfields Stadium starting in the 2013–14 season. A return to the Ricoh Arena was announced on 21 August 2014 by the club after a one-year absence.

Show me more statistics about Coventry City with

Coventry City was on 6 position during the following seasons:

Coventry City was on 7 position during the following seasons: