Other Forwards playing in Crystal Palace 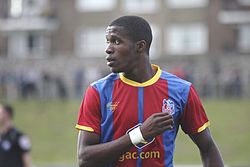 Dazet Wilfried Armel Zaha (born 10 November 1992), known as Wilfried Zaha, is a professional footballer who plays as a winger for Crystal Palace.

He advanced into the Crystal Palace first team from their academy in 2010. In January 2013, he transferred to Manchester United for an initial fee of £10 million, but remained on loan at Palace until the end of the season, helping them return to the Premier League. After an unsuccessful 2013–14 season with Manchester United (partly spent on loan at Cardiff City), Zaha returned to Palace in August 2014 on a season-long loan, before rejoining the club on a permanent basis in February 2015.