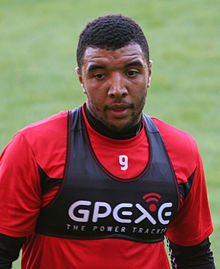 Troy Matthew Deeney (born 29 June 1988) is an English professional footballer who plays for Watford. He plays primarily as a striker. After being part of Aston Villa's youth system, Deeney started his professional career at Walsall. He transferred to Football League Championship side Watford in 2010 and captained the side to promotion to the Premier League in the 2014–15 season.