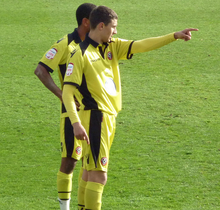 Matthew John Lowton (born 9 June 1989) is an English professional footballer who plays for Burnley. He can play in a number of defensive positions but is a natural right back.

Born in Chesterfield, Derbyshire, Lowton joined Sheffield United's academy in 2004. He spent time on loan with both non-league Sheffield and Hungarian side Ferencváros before making the break into United's first team in 2010. He played regularly for two seasons before being sold to Aston Villa in 2012. After three seasons and 72 Premier League appearances, he joined Burnley in 2015.