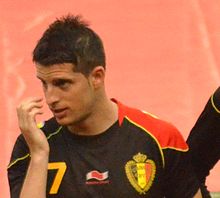 Mirallas started his professional career in France with Lille & Saint-Étienne before moving to Greece with Olympiacos in 2010. Mirallas enjoyed success during his time at Olympiacos scoring 34 goals in 52 league games, thus earning the leagues top scorer in his second season with 20 goals in 25 games. His impressive performances attracted the services of Everton who signed him in the summer of 2012 for £6m.