Other Midfielders playing in Manchester City 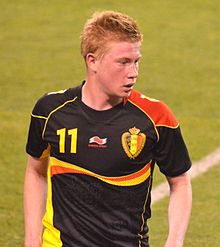 Kevin De Bruyne (Dutch pronunciation: [də ˈbrœy̆nə]; born 28 June 1991) is a Belgian professional footballer who plays as an attacking midfielder for English club Manchester City and the Belgium national team. He is often described as one of the best modern day playmakers due to his wide range of passing and long-range shooting skills.

De Bruyne began his career at Genk, where he was a regular player when they won the 2010–11 Belgian Pro League. In 2012 he joined English club Chelsea, where he was used sparingly and then loaned to Werder Bremen. He signed with Wolfsburg for £18 million in 2014, and in 2015 he was named Footballer of the Year in Germany. Later that year, he joined Manchester City for a club record £55 million.