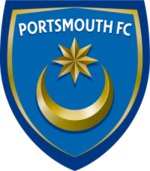 Portsmouth Football Club i/ˈpɔərtsməθ/ is a professional football club based in the city of Portsmouth, England. Portsmouth's home matches have been played at Fratton Park since the club's formation in 1898. Portsmouth have been champions of England twice, in 1949 and 1950. The club has also won the FA Cup on two occasions, firstly in 1939 and most recently in 2008.

Portsmouth were moderately successful in the first decade of the 21st century, especially during the 2007–08 Premier League season, when they won the FA Cup, beating Cardiff City 1–0 in the final. They subsequently qualified for the 2008–09 UEFA Cup competing against European heavyweights such as seven-times European Cup winners A.C. Milan. During this period, Portsmouth were recognised to have a large number of international footballers, including England players Glen Johnson and Jermain Defoe, as well as Peter Crouch, David James and Sol Campbell. However, financial problems soon set in and Portsmouth were relegated to the Football League Championship in 2010. In 2012 they were again relegated, to League One, and again, in 2013, to League Two. They began the 2013–14 season in the fourth tier of the English football league system for the first time since the late 1970s.

Show me more statistics about Portsmouth with

Portsmouth was on 1 position during the following seasons:

Portsmouth was on 3 position during the following seasons: