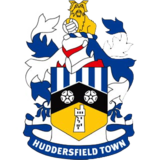 Huddersfield Town Association Football Club is an English association football club that is based in the West Yorkshire town of Huddersfield and currently play in the Football League Championship (2015–16).

In 1926, Huddersfield became the first English club to win three successive league titles, a feat which only three other clubs have matched, and none has bettered. They also won the FA Cup in 1922.

Nicknamed The Terriers, the club plays in blue and white vertically striped shirts and white shorts. They have played home games at the John Smith's Stadium since 1994. The stadium replaced Leeds Road, Huddersfield Town's home since 1908.

Show me more statistics about Huddersfield Town with

Huddersfield Town was on 1 position during the following seasons:

Huddersfield Town was on 2 position during the following seasons:

Huddersfield Town was on 3 position during the following seasons: