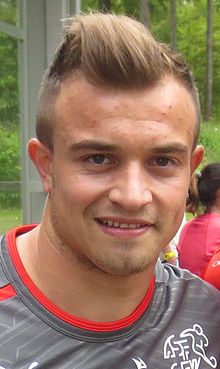 Xherdan Shaqiri (Albanian pronunciation: [dʒɛrˈdan ʃaˈciɾi]; born 10 October 1991) is a Swiss footballer who plays as a midfielder for English club Stoke City, and the Switzerland national team. FIFA's official website describes him as "unpredictable on the ball, adept with both feet, clinical in front of goal and possessing excellent vision". He is nicknamed "the Alpine Messi" and "the magic dwarf".

He began his career at FC Basel, winning honours including three Swiss Super League titles, before moving to Bayern Munich, where he gained domestic and international honours despite playing less frequently. In January 2015 he moved to Inter Milan, and seven months later to Stoke City for a club record £12 million.