Other Defenders playing in Everton 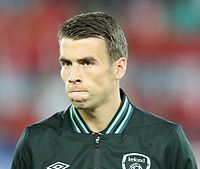 Séamus Coleman /ˈʃeɪməs ˈkoʊlmən/ (born 11 October 1988) is an Irish professional footballer who plays for Premier League club Everton and the Republic of Ireland national team. Originally a Gaelic footballer, Coleman started his association football career with Sligo Rovers before moving to English club Everton in 2009. In 2010 he spent half a season on loan with Blackpool, helping the team to win promotion via the 2010 Championship play-off, before returning to Everton. In his international career Coleman has won the 2011 Nations Cup and was awarded the FAI Under 21 International Player of the Year in both 2009 and 2010.