Other Forwards playing in Manchester City 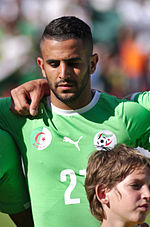 Riyad Mahrez (born 21 February 1991) is a professional footballer who plays for English club Leicester City and the Algerian national team as a winger.

Mahrez began his career as a youth player for French club, AAS Sarcelles. He went professional in 2009, with Quimper, where he played for only one year before moving to Le Havre, spending three years with them. However, he initially failed to break into the first team, but was a regular for their second team, subsequently earning a first team place. In January 2014, Mahrez made a permanent transfer to then-Championship side, Leicester City.