Other Midfielders playing in Newcastle United 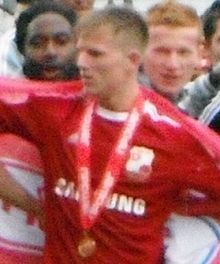 Matthew Thomas "Matt" Ritchie (born 10 September 1989) is a Scottish international footballer who plays for Premier league club Bournemouth as a right winger. He previously played for Portsmouth and Swindon Town before joining Bournemouth in 2013.

Born and raised in England, Ritchie qualified to play for Scotland through his Scottish father. He made his senior international debut on 25 March 2015 against Northern Ireland.