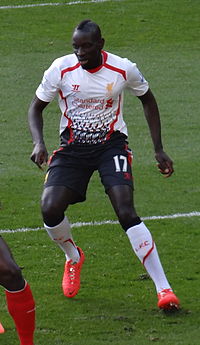 Mamadou Sakho (born 13 February 1990) is a French professional footballer who plays for English club Liverpool and the France national team as a central defender. He is known for his leadership credentials, his tireless engine, hard-working attitude,and his tackling ability. He has also been praised for his "physical and tactical qualities". Thus resulting in him acquiring the nickname "The Beast". Sakho is also known for the eccentric hairstyles he often displays while playing, and has earned the nickname Kirikou by some supporters as a result.

Sakho started his career at Paris FC in 1996 before moving to professional club Paris Saint-Germain in 2002. After excelling in the youth system, Sakho earned a call up the senior team by manager Paul Le Guen. In October 2007, on his league debut, he became the youngest player ever to captain a Ligue 1 club after wearing the armband in the club's 0–0 draw with Valenciennes. Since making his debut with the club, Sakho has become an integral part of the team earning starting berths in the first 11 under managers Paul Le Guen and Antoine Kombouaré. Sakho's playing style and ability have led to the media and former players drawing comparisons to former French international Lilian Thuram.