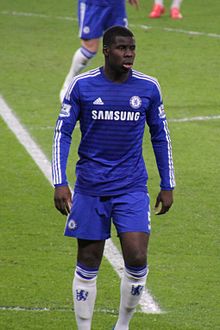 Kurt Happy Zouma (born 27 October 1994) is a French professional footballer who plays as a centre back for English club Chelsea.

He began his career at Saint-Étienne, making his professional debut aged 16. Zouma won the Coupe de la Ligue with the club in 2013, and joined Chelsea for £12 million in January 2014. Chelsea loaned him back to his first club for the remainder of the season, and in his first full campaign in England, Zouma helped Chelsea win the League Cup and the Premier League.