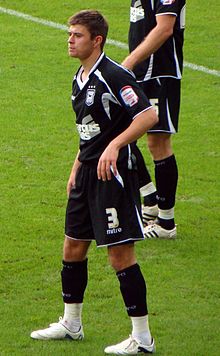 Aaron William Cresswell (born 15 December 1989) is an English footballer who plays as a left back for West Ham United. He made his professional debut for Tranmere Rovers in 2008 and went on to make 70 league appearances for the club before signing for Ipswich in 2011, following a tribunal to agree the value of the transfer. He made 138 appearances for Ipswich scoring six goals before joining West Ham United in July 2014.