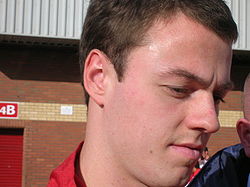 Jonathan Grant "Jonny" Evans (born 3 January 1988) is a Northern Irish professional footballer who plays as a defender for Premier League club West Bromwich Albion and the Northern Ireland national team. Evans was born in Belfast and started his career at Greenisland FC, where he was spotted by Manchester United scouts. He progressed through Manchester United's football Academy to play in several foreign tours in the summer of 2006. He then went on loan to Royal Antwerp and had two spells with Sunderland. He made his Manchester United first team debut in the 2007–08 League Cup, becoming a regular first-team squad member the following season. Despite his young age, Evans is already the second most decorated player in Northern Irish football history with nine major trophies.