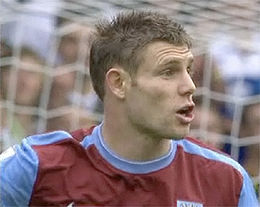 James Philip Milner (born 4 January 1986) is an English professional footballer who plays as a Winger or a Midfielder for Liverpool and the English national team. Milner is the vice-captain of Liverpool. He has previously played for Leeds United, Swindon Town, Newcastle United, Aston Villa and Manchester City. Playing as a central midfielder with Aston Villa, Milner was named PFA Young Player of the Season and in the PFA Team of the Season for the 2009–10 Premier League season; however, after his move to Manchester City, Milner was more often utilised as a winger.

Milner's talent in football, cricket, and long-distance running was recognised at a very young age. He represented his school in these sports and played football for amateur teams from Rawdon and Horsforth. He supported Leeds United from a young age and was a season ticket holder at the club. In 1996, he joined the Leeds United youth academy. He made his debut for the first team in 2002 aged only 16 and gained prominence as the youngest player to score in the Premier League.