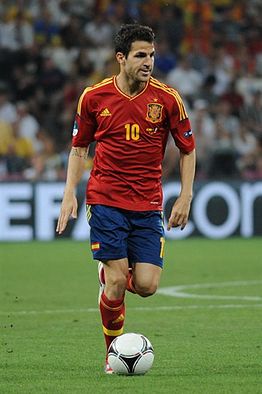 Francesc "Cesc" Fàbregas Soler (Catalan: [ˈsɛsk ˈfaβɾəɣəs]; born 4 May 1987) is a Spanish professional footballer who plays for Premier League club Chelsea and the Spain national team. Fàbregas plays mainly as a central midfielder or attacking midfielder but has also played as a winger or a second striker on some occasions.

Fàbregas started his career as a trainee with Barcelona but was signed by Premier League side Arsenal in September 2003 at the age of 16. Following injuries to key midfielders in the 2004–05 season, he went on to establish himself as Arsenal's starting central midfielder, playmaker and captain. He broke several of the club's records in the process, earning a reputation as one of the best young players in his position. After protracted transfer negotiations, Fàbregas returned to Barcelona; the Catalan giants signed the midfielder for an initial fee of £35 million with a further £5 million in variables on 15 August 2011. Despite competition from his international teammates Xavi and Andrés Iniesta, Fàbregas was a regular goalscorer in his three seasons at Barcelona, and won the first league title of his career in 2013. He signed for Chelsea in June 2014, for a fee in the region of €33 million, winning the League Cup and the Premier League in his first season.