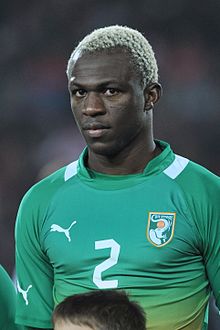 Arouna Koné (born 11 November 1983) is an Ivorian professional footballer who plays for Everton and the Ivory Coast national team as a striker.

After making a name for himself in the Eredivisie, with Roda and PSV, he signed with Sevilla in 2007, where he rarely appeared due to injury and loans. In 2012 he moved from Levante to the Premier League, where he represented Wigan Athletic and Everton, winning one FA Cup with the former.