Other Midfielders playing in Fulham 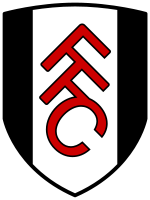 Andreas Hugo Hoelgebaum Pereira (born 1 January 1996) is a Brazilian footballer who plays as a midfielder for English club Manchester United. Born in Duffel, Belgium, he began his career with nearby Lommel United. At the age of nine, he joined Dutch club PSV Eindhoven before signing for Manchester United in November 2011. He has played international football for the youth teams of both Belgium (the country of his birth) and Brazil (his father's homeland).