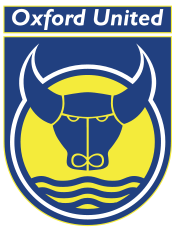 City: Oxford
Stadium: Kassam Stadium
Founded: 1893
Nickname: The Us, Yellows, The Boys from Up the Hill (as Headington United)

Oxford United Football Club is an English association football club based in Oxford, Oxfordshire. The club currently plays in League Two, first entering the Football League in 1962. The chairman is Darryl Eales, the head coach is Michael Appleton and the team captain is Jake Wright.

Founded in 1893 as Headington United, Oxford United adopted their current name in 1960. They joined the Football League in 1962 after winning the Southern Football League, reaching the Second Division in 1968. After relegation in 1976, between 1984 and 1986 the club earned successive promotions into the First Division, and won the League Cup in 1986. Oxford were unable to enter the 1987 UEFA Cup because of the UEFA ban on English clubs in European competitions. Relegation from the top flight in 1988 began an 18-year decline which saw the club relegated to the Conference in 2006. This was the first time in the history of English football that a team that had won a major trophy was relegated from the Football League. After four seasons, Oxford were promoted to League Two in 2010 after a 3–1 win over York City in the Conference National play-off Final at Wembley Stadium.

Show me more statistics about Oxford United with

Oxford United was on 18 position during the following seasons: