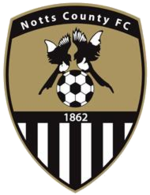 Notts County Football Club (often known as Notts or County or by their nickname The Magpies) is a professional football club based in Nottingham, England. Formed on 28 November 1862, Notts County are the oldest football team in the world to currently play at a professional level. Between 1888–89 and 2013–14 they played a total of 4,756 Football League matches

Chelsea impress via Hudson-Odoi, 7/10, but slump to shock defeat at Newcastle

Nicol: I'm not sure how Spurs are trying to play

What's the difference between Arsenal and Sheffield United?

John Stones lets Man City down as Pep Guardiola's side slump to draw vs. Crystal Palace

Martinelli on target for Arsenal in draw with Sheff Utd

Show me more statistics about Notts County with

Notts County was on 3 position during the following seasons:

Notts County was on 5 position during the following seasons: