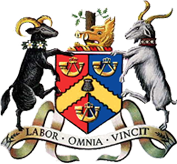 Bradford (Park Avenue) Association Football Club is an English football club based in Bradford, West Yorkshire, England. Its name derived from the club's old stadium on Horton Park Avenue in Bradford (designed by Archibald Leitch), and was used to avoid confusion with Bradford City. However the club is traditionally known simply as Bradford, with the letters BFC adorning Leitch's fine grandstand.

The present club is a reincarnation of the club which graced the Football League from 1908 to 1970 before dropping to the Northern Premier League and going into liquidation in 1974. The new entity, established in 1987, is part of the National League North for the 2015–16 season and plays its home matches at the 3,500-capacity Horsfall Athletics Stadium. Bradford Park Avenue is one of 35 clubs to compete in all four top tiers of English football. Indeed, the new club started life at what was then the thirteenth tier: Division Three of the West Riding County Amateur League.

Show me more statistics about Bradford Park Avenue with

Bradford Park Avenue was on 9 position during the following seasons:

Bradford Park Avenue was on 11 position during the following seasons: