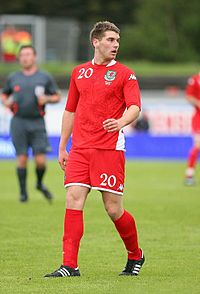 Samuel Michael "Sam" Vokes (born 21 October 1989) is a professional footballer who plays as a striker for English club Burnley and the Wales national team.

Vokes began his professional career at then League One Bournemouth, making his debut in 2006. His form there earned a move to Championship side Wolverhampton Wanderers, where he helped them win promotion to the Premier League in his first season.