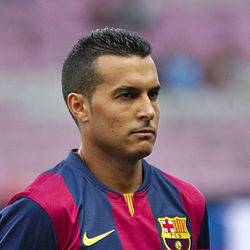 Pedro scored 99 goals in 321 appearances across all competitions for Barcelona from 2008 to 2015, winning 20 major honours including five La Liga titles and the UEFA Champions League three times. During the 2009–10 season, he became the first player in history to score in six different official club competitions in one season.