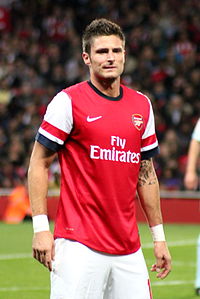 Olivier Giroud (French pronunciation: ​[ɔlivje ʒiʁu]; born 30 September 1986) is a French footballer who plays for English club Arsenal and the France national team. He plays as a striker and is known for his size, physical style of play, heading ability, shot power, strength and link-up play. He is also associated with making runs to the front post that outwit defenders.

He began his career at Grenoble in Ligue 2 before joining Tours in 2008. In his second season at Tours, he was the division's top scorer with 21 goals, earning him a move to top-flight Montpellier. Giroud was again the top scorer with 21 goals in the 2011–12 season, giving the club their first ever Ligue 1 title. He then moved to Arsenal for an estimated £9.6 million.