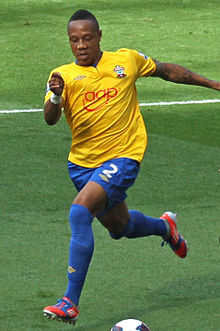 Nathaniel Edwin Clyne (born 5 April 1991) is an English footballer who plays as a right-back for Liverpool and the England national team.

He began his career at Crystal Palace, playing regularly in four Championship seasons before a move to Southampton, where he contested three seasons in the Premier League. He joined Liverpool in July 2015 on a five-year contract for a fee of £12.5 million.