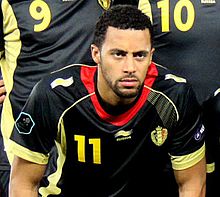 Mousa Sidi Yaya Dembélé (born 16 July 1987), also spelled Moussa Dembélé, is a Belgian footballer who plays as a central midfielder for Tottenham Hotspur in the Premier League and the Belgium national football team, for whom he has achieved over 50 caps. Dembélé started his career at Belgian Pro League team Germinal Beerschot before spells at Dutch Eredivisie sides Willem II and AZ. Dembélé transferred to Premier League side Fulham in 2010 before joining current club Tottenham in August 2012. He was ranked 91st in The Guardian 's list of the 100 best current footballers in 2012.