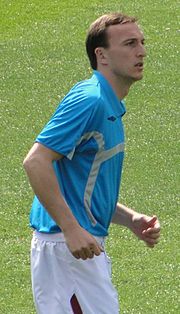 Mark James Noble (born 8 May 1987) is an English footballer who plays as a central midfielder and is captain of West Ham United. He has played almost all his youth and first team football for West Ham apart from two short loan spells, at Hull City and Ipswich Town. He has played for England at U16, U17, U18, U19 and U21 levels. He captained the U21 side, scoring three goals in twenty appearances. Noble is the longest serving player in West Ham's current squad, having been in the first team since 2004. He is West Ham's first-choice taker for penalty kicks and has won the club's Hammer of the year trophy twice.[better source needed] In 2014 he was ranked in the top 5 penalty takers in the top European leagues and was in the top 10 in the world based on the percentage of penalties successfully converted since 2009. Noble has played more Premier League games for West Ham than any other player. He overtook Steve Potts' previous record of 204 appearances on 29 November 2014 in a 1–0 win against Newcastle United.