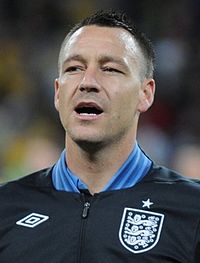 John George Terry (born 7 December 1980 in Barking) is an English professional footballer who plays for and captains Chelsea. He commonly plays as a centre back. He was also captain of the England national football team, holding the post from August 2006 to February 2010, and again from March 2011 to February 2012.

A strong, tenacious, commanding, and physical defender, Terry excels in the air, and he is known for his aggressive tackling, positioning, and his ability to read the game; he is considered to be one of the best central defenders of his generation. Terry was named UEFA Club Defender of the Year in 2005, 2008 and 2009,PFA Players' Player of the Year in 2005, and was included in the FIFPro World XI for five consecutive seasons, from 2005 to 2009. He was also named in the all-star squad for the 2006 FIFA World Cup, the only English player to make the team.[16]