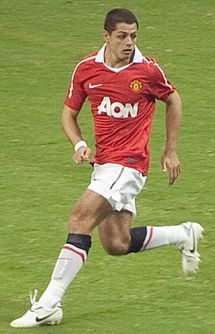 Javier Hernández Balcázar (Spanish  [xaˈβjeɾ erˈnandes] (help·info); born 1 June 1988) is a Mexican professional footballer who plays as a forward for German club Bayer Leverkusen and the Mexico national team. Hernández is commonly known by his nickname, Chicharito (Mexican Spanish: little pea), which he wears on his shirt.

He began his career in 2006, playing for the Mexican club Guadalajara, before becoming the first Mexican player to join Manchester United in July 2010. After falling out of favour under managers David Moyes and Louis van Gaal, he spent the 2014–15 season on loan to Real Madrid, then moved permanently to Bundesliga club Bayer Leverkusen on 31 August 2015.