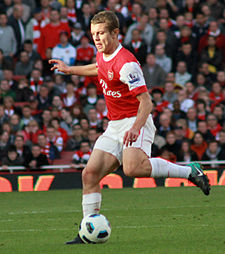 Jack Andrew Garry Wilshere /ˈwɪlʃər/; born 1 January 1992) is an English professional footballer who plays for English club Arsenal and the England national team. He plays primarily as a central midfielder.

Wilshere came up through Arsenal's youth academy and impressed from an early age. He made his first team debut in 2008, becoming Arsenal's youngest ever league debutant at the age of 16 years, 256 days. Wilshere has earned a number of accolades including the PFA Young Player of the Year award, nomination to the 2010–11 PFA Team of the Year, and Arsenal's Player of the Season award, as voted for by fans for his performances in his first full campaign for Arsenal during the 2010–11 season.