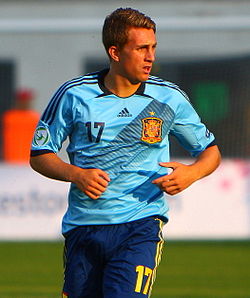 Gerard Deulofeu Lázaro (born 13 March 1994) is a Spanish footballer who plays for English club Everton. Mainly a right winger, he can also play as a forward.

He started his career with Barcelona, first appearing with the first team at the age of 17, and was loaned to Everton and Sevilla before joining the former on a permanent basis in summer 2015.