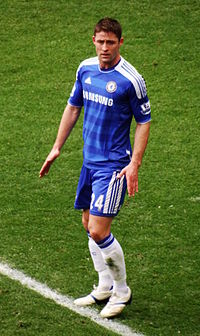 Gary James Cahill /ˈkeɪhɪl/ (born 19 December 1985) is an English professional footballer who plays for Chelsea and is the vice-captain of the England national team. He usually plays centre back for both club and country. Despite being a defender, Cahill is noted for his technical ability and distribution, and occasionally, for his finishing prowess, and strength with his head. A quick, consistent and reliable centreback, Cahill is also known for his positioning and his ability to read the game.

Cahill began his career playing for the AFC Dronfield youth set-system in Derbyshire. In 2000, he joined the Aston Villa Academy and continued his development. In 2004 he joined Burnley on a season-long loan, where he performed well before returning to make his Aston Villa debut. Later, he signed for hometown club Sheffield United on a three-month loan deal. On 30 January 2008, he signed for Bolton Wanderers for approximately £5 million. Cahill performed well for Bolton through the years, cementing a place in the first-team and becoming vice-captain. He made 130 league appearances and scored 13 league goals for Bolton. In January 2012, Cahill signed for Chelsea for approximately £7 million. Cahill won the UEFA Champions League and the FA Cup in his debut season at Chelsea.