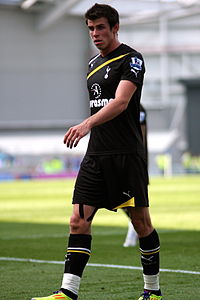 Gareth Frank Bale (born 16 July 1989) is a Welsh professional footballer who plays as a forward or winger for La Liga club Real Madrid and the Wales national team.

Bale began his professional career at Southampton, playing at left-back and earning acclaim as a free kick specialist. He moved to Tottenham Hotspur in 2007, for an eventual £7 million fee. During his time at Spurs, managerial and tactical shifts saw him transform into a more offensive player. From the 2009–10 season, Bale became an integral part of the team, rising to international attention during the 2010–11 UEFA Champions League. In 2011 and 2013 he was named PFA Players' Player of the Year, and was named in the UEFA Team of the Year. In 2013 he was also named PFA Young Player of the Year and the FWA Footballer of the Year.