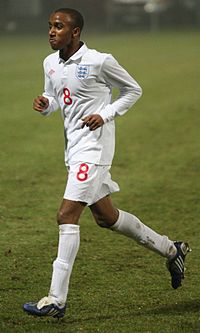 Fabian Delph (born 21 November 1989) is an English professional footballer who plays as a midfielder for Premier League club Manchester City and the England national team.

He was on the books of Bradford City as a youngster until he moved to Leeds United aged 11. Having played 45 games for Leeds at League One level and once in the Championship, he transferred to Premier League side Aston Villa in August 2009 for £6 million. In 2012, he returned to Leeds for a short loan spell. Delph had a successful start to the 2012–13 Premier League season, leading Villa manager Paul Lambert to call for his inclusion in the England squad. On 17 July 2015, Delph joined Manchester City for £8 million.