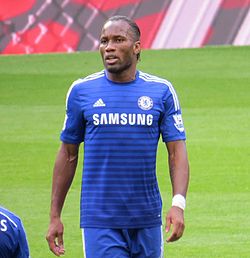 Didier Yves Drogba Tébily (French pronunciation: ​[didje dʁɔɡba]; born 11 March 1978), known as Didier Drogba, is an Ivorian professional footballer who plays as a striker for Canadian club Montreal Impact. He is the all-time top scorer and former captain of the Ivory Coast national team. He is best known for his career at Chelsea, for whom he has scored more goals than any other foreign player and is currently the club's fourth highest goal scorer of all time. In a 2012 poll, Chelsea fans voted Drogba the club's greatest ever player. He has also been named African Footballer of the Year twice, winning the accolade in 2006 and 2009.

After playing in youth teams, Drogba made his professional debut aged 18 for Ligue 2 club Le Mans, and signed his first professional contract aged 21. After finishing the 2002–03 season with 17 goals in 34 appearances for Ligue 1 side Guingamp, he moved to Olympique de Marseille, where he finished as the third highest scorer in the 2003–04 season with 19 goals and helped the club reach the 2004 UEFA Cup Final.