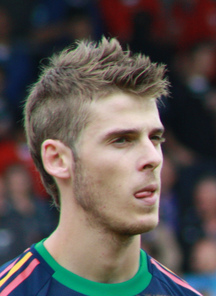 Born in Madrid, he started his career aged 13 with Atlético Madrid and rose through the academy system at the club before making his senior debut in 2009. After being made Atlético's first-choice goalkeeper, he helped the team win both the UEFA Europa League and the UEFA Super Cup in 2010. His performances attracted the attention of Manchester United, whom he joined in June 2011 for £17.8 million, a British record for a goalkeeper.