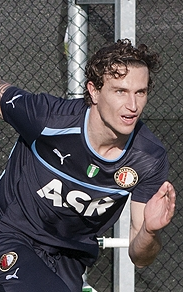 Daryl Janmaat (born 22 July 1989) is a Dutch professional footballer who plays for Newcastle United and the Dutch national team as a right back.

He began his career at ADO Den Haag, and went on to play for the Eredivisie clubs Heerenveen and Feyenoord before joining Newcastle on a six-year deal in 2014.